1 October 2014  Neiafu, Vava'u, Tonga
It’s the start of another month, so we did a bit of planning.  The cyclone season officially starts here in November, so we need to be leaving the Tropics and sailing down to New Zealand.  This could be a very nasty passage if we get the weather wrong.

The passage from Tongatapu (at the southern end of Tonga) to New Zealand is 1150 miles, which will take us 7-9 days.  At the moment, there’s a steady procession of highs and lows passing between Tonga and New Zealand giving unsettled weather up here and south west gales down there every five days, so there’s not a big enough weather window to avoid getting clobbered somewhere.  Our current thought is to sail to Minerva Reef, which is an isolated atoll 380 miles south west of Tongatapu where we can hunker down and wait for a good 5-6 day weather window to sail the remaining 750 miles New Zealand. 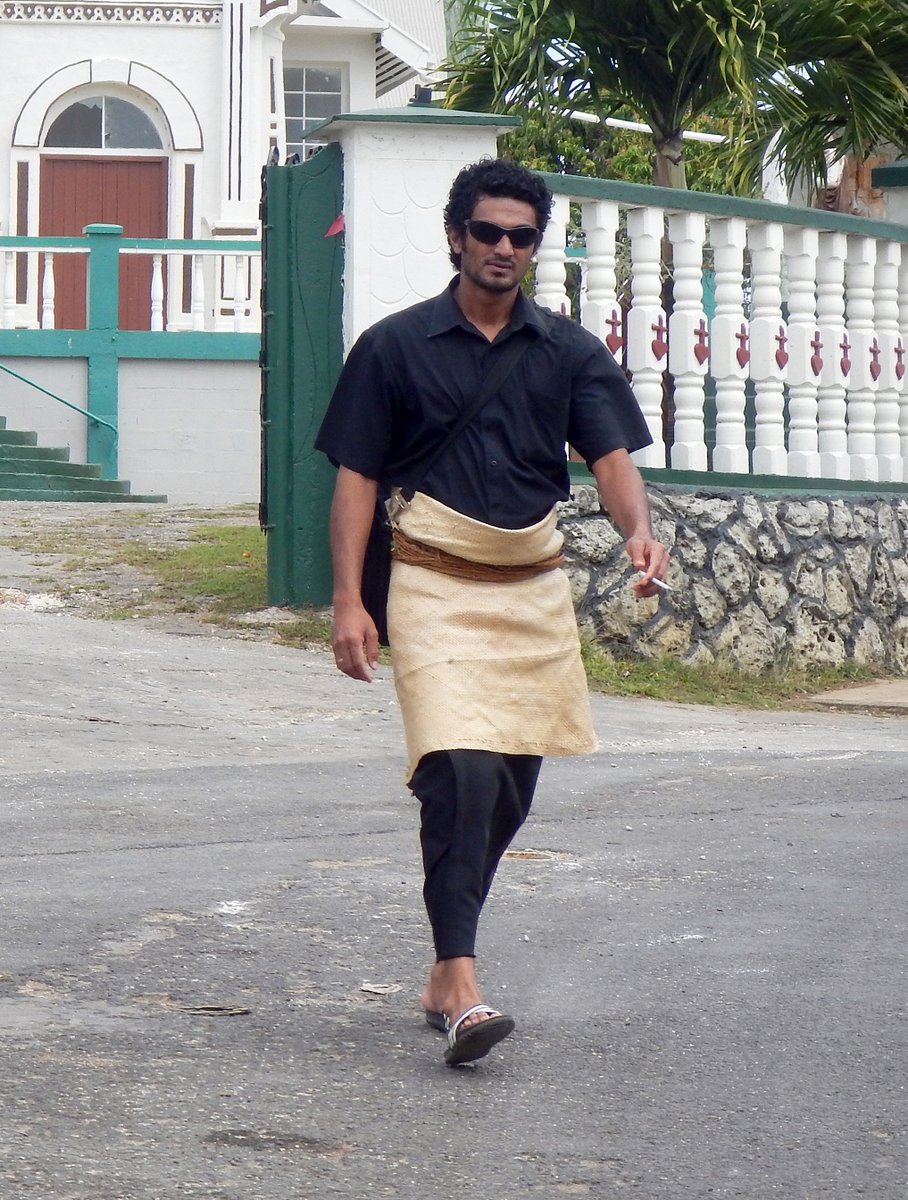 We’re planning to get to Tongatapu by the end of October, and then be ready to go to Minerva Reef when there’s a good weather window.   This gives us a month to explore the rest of Tonga.  It’s only 160 miles from here to Tongatapu, so we can take our time and we’re planning to spend some time in the remote Ha’apai group of islands on the way.

With our deliberations over, we emptied three cupboards to give me access to the pipe work for our two fridges and I spent a couple of hours trying to find the damn leaks.  I made sure that both systems were overcharged with refrigerant and then turned them off, which increases the pressure in the pipework.  I then tried to find the leak using the old fashioned method of brushing on soapy water, but I couldn't find a single little bubble, which was very frustrating.  The leaks may be in the evaporators or even in the condenser coils that are in two sea cocks and permanently immersed in water - it’s another job for New Zealand.

In the afternoon, we went into town to pick up the laundry & some groceries and then went over to “Laragh” to catch up with David and Katrina who we last saw in Penrhyn.  They've done a lot of sailing around the Vava'u island group, so they gave us some good information on places to visit.

In the evening, we went over to “Flow” to do some more reminiscing.

2 October 2014  Neiafu to Port Morell (No.7), Vava’u
It was a lovely day, so we decided to leave the harbour and go out to the outlying islands to recover from three nights of partying.  We went into town to stock up on the essentials - beer, wine, bread, coke and a few vegetables.  I left Glenys in town and took the groceries back to the boat, recharged the damn fridge and did some tidying up.

Glenys came back just before midday with a nice basket woven from Pandanus to add to her collection of local crafts.  She’d also bought a bag and scarf, which has been dyed with clay from the soil in the area.  It’s an orangey-brown colour and the locals sell a range of t-shirts called “Dirt Shirts”, so Glenys has just bought a “Dirt Bag”.

After lunch, we dropped the mooring and motor-sailed to Anchorage 7, which is very nice.  There’s a big charter boat fleet here and the charter companies have produced a map of the many small islands in the group, which shows all the anchorages as numbers, so everyone uses numbers not names  - it’s not the most romantic way of naming anchorages, but practical.

We picked up a mooring and dinghied a mile to Swallow Cave, which is a lovely cave on the point of a headland.  As we were the only people there, we took our dinghy inside and jumped in the water.  In the late afternoon, the sun shines in through a hole in the roof and the cave mouth, producing lovely shafts of light in the crystal clear waters.  The water is 10-15 metres deep inside the cave and there was a huge shoal of fish inside the cave giving me a good underwater photo opportunity - if only I had a decent camera. 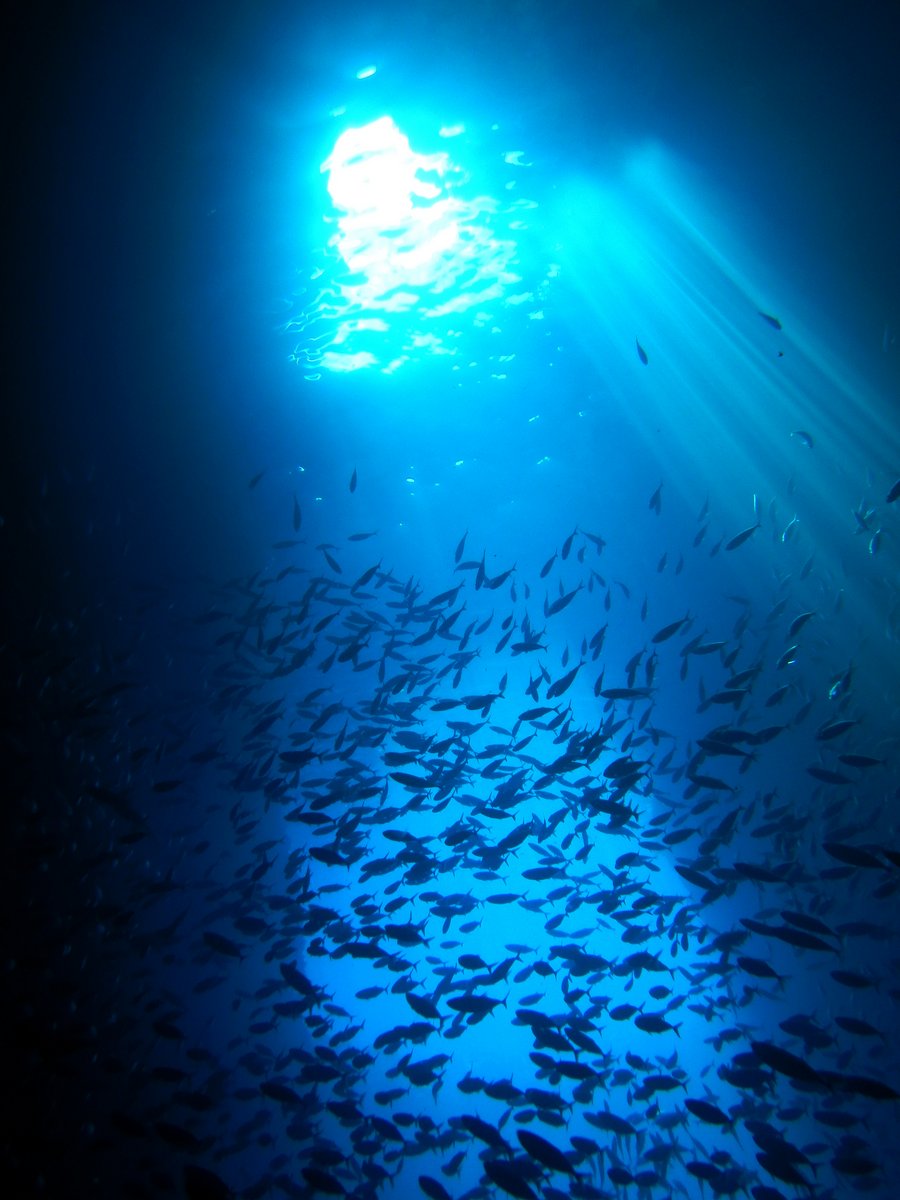 We had a quiet night in for a change. Glenys fried up some snapper that she bought earlier and we had it with Breadfruit Chips and Palusami (Taro leaves cooked with Coconut Cream) - delicious, but I don’t think that she cooked the taro for long enough because we both had tingling lips and tongues afterwards.

Just before bed, Glenys found a huge Cockroach in our back heads.  I asked her to lock me in with the monster and it took me five attempts to kill the damn thing with the flat of my hand - I hit it so hard that I've bruised the palm of my hand.  This is the third cockroach that we’ve killed in the last two months, but the others were in Penrhyn, so we’re hoping that we haven’t got a nest.

3 October 2014   Port Morell to Lape (No.17), Vava’u
We dropped the mooring at 10 o'clock and slowly meandered to Anchorage 17 just off Lape Island stopping off at a couple of places to check out the anchorages.  Most of the anchorages that we've seen so far have very steep drop offs and are heavily covered with coral heads.  Lape is similar, so we picked up a mooring.

There’s been some advertising on the local cruiser’s net for a Tongan feast here on Saturday night, so we went ashore to find out about it. We were met by a nice lady called Catie who was chilling out under a mango tree.  She took the $10 pa'anga mooring fee off us, but told us that they didn't have enough people to do a Tongan feast at the moment.

Catie took us for a walk around the small village, where only 32 people live.  The wooden houses are scattered around this steeply sided island and joined together by narrow foot paths.  The villagers have small plantations of papaya and banana and there are dozens of huge mango trees laden with green fruit, but unfortunately, they won’t be ready for a month yet.

After lunch, we went for a snorkel between Langito'o and Vakaeitu islands.  The reef is very shallow, but we continued swimming through breaking waves to the outside edge of the reef, which is very spectacular.  It dropped off to about 20 metres and had very healthy coral.  There are even small sponges and we spotted some Crinoids - the first time that we've seen these creatures since we were in the Caribbean Sea.

We tried another snorkel on the reef extending out from Lape Island between Langito'o and Lape.  The coral is beat up and mostly dead, but I found a nice Murex Shell for Glenys and we saw a Zebra Shark.  This large 10 foot long shark looks like a big nurse shark and is covered with dark spots - it’s called a Zebra Shark because the juvenile is striped.  It’s the first time that I've seen on of these, so I swam down and tried to get close, but it just remorselessly carried on its way. 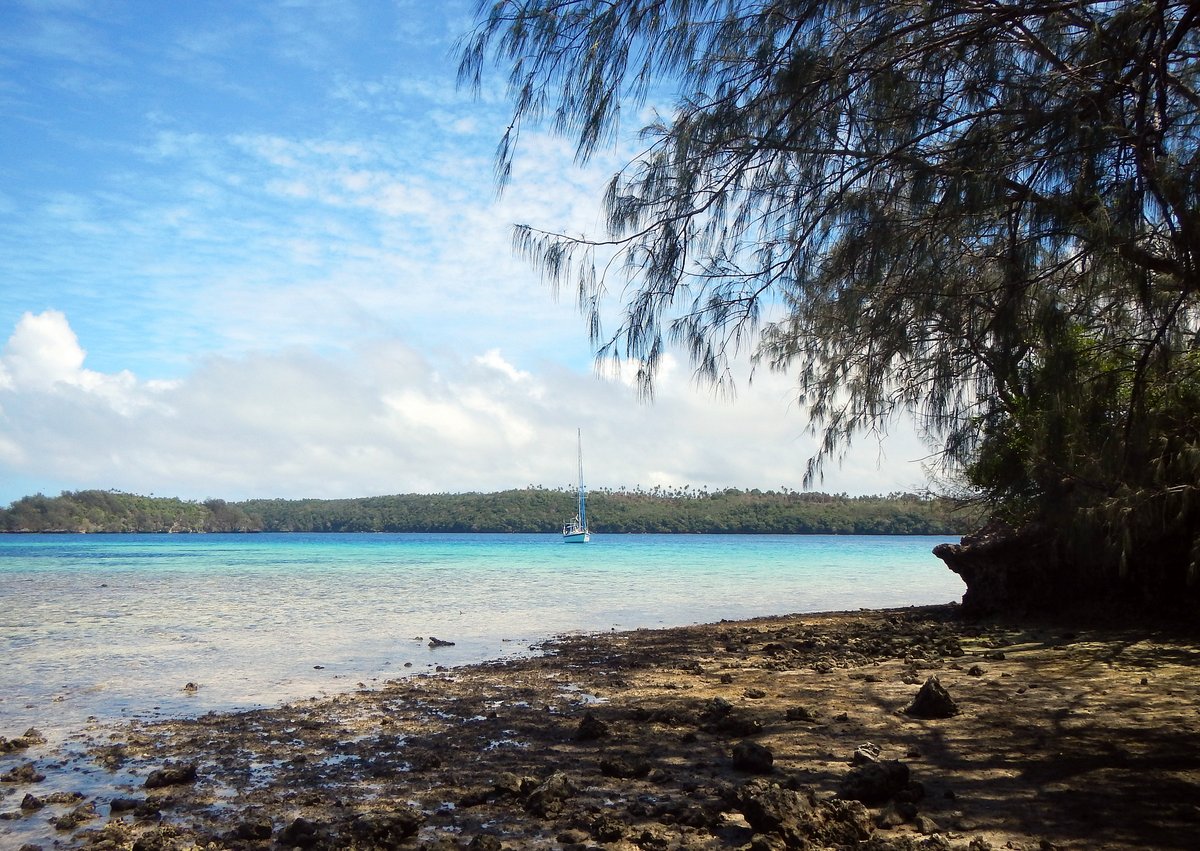 After two hours snorkelling, we were pretty tired, so we had a quiet night and watched a movie.

4 October 2014   Lape to Tapana Island (No.11), Vava’u
We went across to look at Euakafa Island (No. 32), but the anchorage to the north of the island was packed with coral heads and the one to the west was open to the strong trade winds, so after looking around for fifteen minutes and trying three places, we gave up and ran away.  The anchorages might be rubbish around here, but the sailing in these sheltered waters is great and we had a cracking four mile sail to Tapana Island (No. 11).

We managed to find a bit of sand and anchored in the pass between the two islands in 8 metres of water.  We’re surrounded by reef and hanging off a shelf over deeper water, but the trade wind seem to be consistent here and it’s blowing us off the reef, so fingers crossed we look okay and the water colours are very pretty.

After lunch, we went ashore to book a Tongan feast at the Three Little Birds bar, but it was all closed up, so Glenys called Vava'u Adventures and the lady there booked a couple of places for us at lunch time tomorrow.  We chilled out for the rest of the afternoon, Glenys went for a snorkel, but I couldn't motivate myself to put on my wet suit - the water seems really cold to us now.

5 October 2014   Tapana Island, Vava’u
It was low tide during the morning, so we went for a walk on the windward side of the island to look for shells.  We picked up lots of small shells, which looked interesting, but nothing spectacular.

At half past twelve, we went to the Three Little Birds bar for our Tongan feast, but it was all closed up.  We hung around for half an hour, but nothing seemed to be happening.  Back at the boat, we tried to call the Three Little Birds and Vava'u Adventures, but being a Sunday, we heard nothing back.  We were really disappointed because we’d been looking forward to our Sunday lunch, so we cracked open a couple of cold beers and drank the day away.

6 October 2014   Tapana Island to Port Morell (No.7), Vava’u
It was a miserable night with some squalls going through, giving strong winds and rain.  I was a bit worried because we were hanging off a reef and, if the wind swung around, we could end up on the reef, so I got up a couple of times to check the wind direction and was very restless for the remainder of the night. 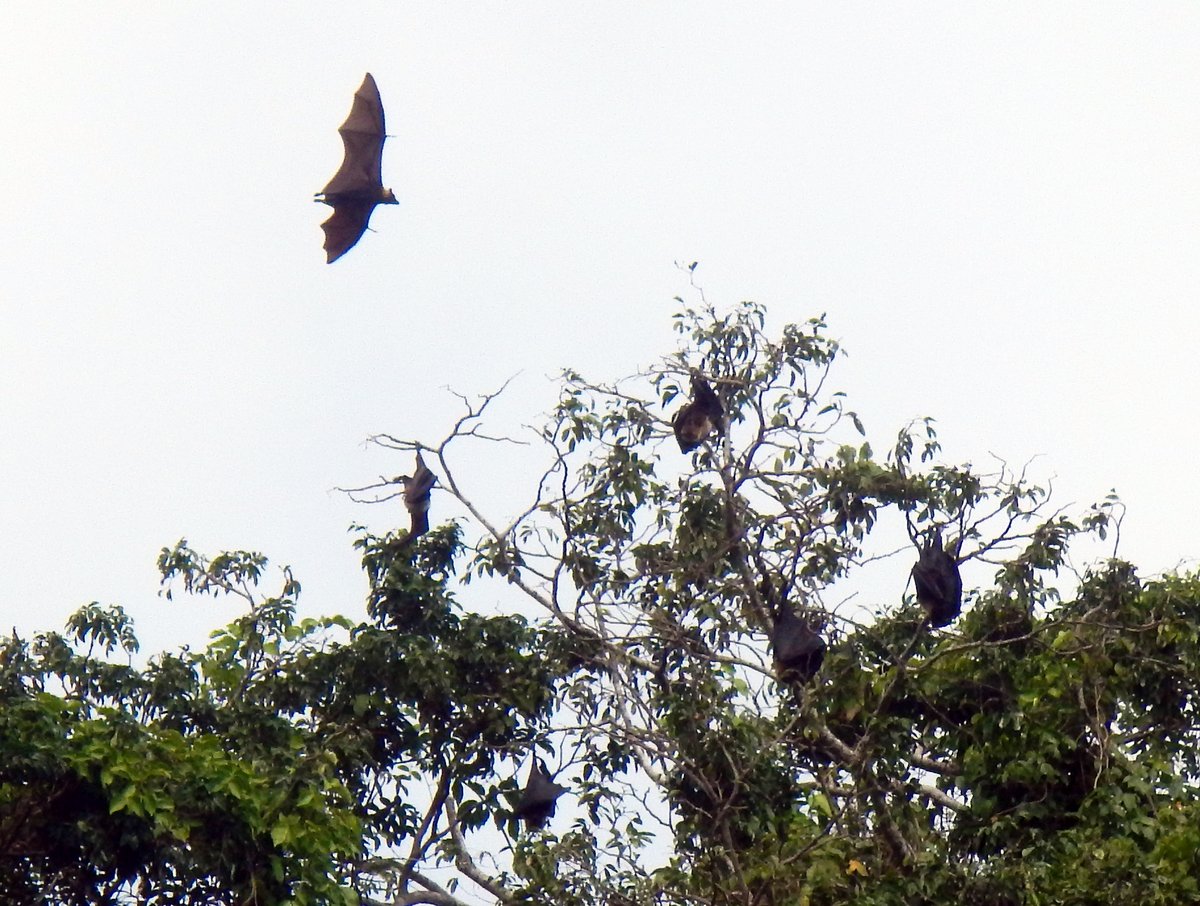 By nine o’clock, the weather had cleared up, so we pulled up the anchor and sailed across to Taunga Island hoping to anchor in Anchorage No.22.  This is a narrow channel between drying reefs and again the sea bed had lots of coral heads.  We tried to anchor on a shelf, but dragged and it was blowing a hooley, so we gave up.  We tried in a couple of more places to the south east, but again the holding was crap, so we ran away.

We sailed back to Port Morell (No.7) and managed to find a sandy patch for our anchor on the south side of the bay.  It’s a lovely anchorage, with a white sandy beach and rocky side to the bay and gives great protection from the north, east and south winds.  So far, this is our favourite anchorage in Vava’u.

We went snorkelling on the east side of A’A Island, which was okay but nothing spectacular although there were a lot of small Networked Pipefish around which kept my interest.  On the way back, I saw some Fruit Bats in the trees and we spent ten minutes watching them flap around as our presence disturbed them.  It’s interesting how they make an approach to a tree like a bird, but then let themselves turn upside down as they grab the branch - looks weird.