1 January 1994   Hog Island to Prickly Bay, Grenada
The start of another year.  We motored around to Prickly Bay and anchored in three places before we managed to settle down.  There were a lot of boats around.  Gareth and Fi arrived late afternoon.  Gareth cleared in and then zoomed across with a bottle of champagne before zooming back to deal with his charter guests.  We had a quiet night.

2 January 1994   Prickly Bay
Gareth’s guests went at midday, so we had school in the morning and then went over for lunch which was really nice – so much to catch up on!  We had a two hour siesta and then back to “Dabulamanzi” for dinner and a video.

3 January 1994   Prickly Bay
I spent the morning stripping the outboard down with zero success!  I put the windsurfer up in the afternoon and we all went for a quick snorkel with Gareth.  Gareth and Fi came for dinner.

4 January 1994   Prickly Bay
We went into St Georges, picked up some photos and did some shopping.  The boys had lunch at Kentucky Fried Chicken.  I rang a “Mariner” agent and ordered an outboard which should arrive tomorrow.  Fi received the bad news that her sister Annabel is critically ill with malaria in a hospital in Kenya – sounds pretty serious. 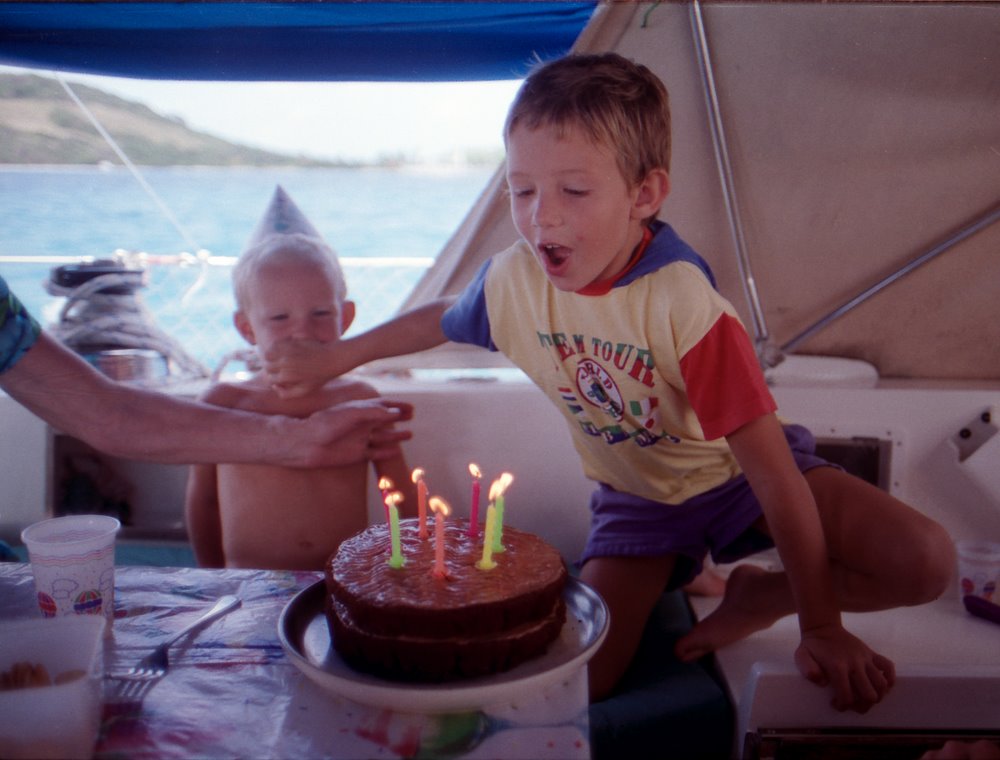 5 January 1994   Prickly Bay
We spent the morning on the boat.  I tried to plan our next six months, which is subject to whims and winds of course.  The new outboard arrived today and it starts great.  Glenys made a goat stew and we took it over to “Dabulamanzi”.

6 January 1994   Prickly Bay
We filled up with water then Glenys went into town.  The outboard sounds a bit “lumpy”, so I rang the dealer who said that it is probably because they put more oil in the mixture than normal.  Ceris arrived today and we all ate on “Dabulamanzi”.

7 January 1994   Prickly Bay to Tyrell Bay
Gareth and I arrived at customs at eight o’clock (opening time).  The guy didn’t turn up until an hour later - island time!  Gareth rang Kenya and it sounds like Annabel is recovering slowly.  We motor-sailed up the coast of Grenada then tried to sail, but we could only point 40° below the rhumb line and wouldn’t have got to Tyrell Bay until after dark.  I’m afraid that I cheated and motored.  It would have been better to have followed Street’s Guide.

Tyrell Bay is a pleasant anchorage.  We met our first “boat boys” trying to sell us oysters, wine, limes, lobster, t-shirts, etc.  They were all fairly pleasant.  I had a bit of trouble with two of them who kept trying to persuade me to give them my old outboard as a Christmas present.

8 January 1994   Tyrell Bay to Tobago Cays
What an exhausting day!  We got up fairly early and went round to Sandy Island.  This is a beautiful small island with palm trees and white beaches.  Gareth, Glenys and I went snorkelling on the reef, which was the best I’ve seen (so far).  Parrot fish, cuttle fish, trumpet fish, damsel fish, etc.

We then had a nice beat to Union Island where we cleared into St Vincent.  This cost £7 for crew and £5 for overtime.  I think that it’s always overtime in the islands!  There are two pools at the Yacht Club, one with nurse sharks and one with lobsters.  We then motored to the Tobago Cays, which on first impressions is crowded and windy.  The 50 metre voyage to “Dabulamanzi” in the dinghy last night was very wet.

9 January 1994   Tobago Cays
Brett’s official birthday.  We went to Jamesby Island with Brett and Craig, while Glenys prepared the party, complete with Birthday Cake. Brett struggled to blow the candles out because Craig kept blowing them out first in his excitement! Brett solved the problem by covering Craig’s mouth while blowing out the candles.

Gareth, Glenys and I went snorkelling on the other side of Horseshoe Reef via the small boat channel – absolutely superb, I’d love to dive here.  We went back inside the reef and did some more snorkelling in shallow water.  Gareth suggested that I dive down and look at a small bit of reef where an agressive little Damsel fish shot out and bit me on the arm - I’ll get him back!

We went to “Dabulamanzi” for dinner and had a second Christmas with presents and party games.  Lobster for dinner – very nice.  Craig stayed the night with Grandma – some party!

10 January 1994   Tobago Cays
Gareth and Fi left to pick up their next guests and Ceris moved on board Glencora.  We re-anchored closer to another island.  We did a bit of windsurfing, snorkelling, beach, etc.  “Whisper” turned up.  We had flying fish for dinner.

We’ve picked up a small plague of cockroaches somewhere. They’re small, fast little buggers. Glenys is on a mission to get rid of them - she doesn’t want her mum to know that we’re infested. It’s worst when you turn on the saloon light at night. They come out in the dark and when the light is switched on, they freeze for about a second and then scurry off - if you’re very fast you might squish one or two!

We’ve tried various poisons with little success - we’ve now bought some special cockroach traps, which are little cardboard tunnels with something nasty in them.