8 April 2019   Titusville to New Smyrna, Florida
We had a lovely peaceful night and set off after breakfast, heading for New Smyrna to meet up with an old skydiving friend, Tony Uragello.  It was only 30 miles, so we arrived just after midday and were surprised see Tony and his wife Mary standing on a dock waving to greet us – by the time that we realised who it was, we’d gone past.

It took us a good 45 minutes to find an anchorage at New Smyrna – we looked at anchorages opposite the Smyrna Yacht Club; in the cut by Chicken Island; the Town Quay and an anchorage just south of the bridge, but none looked ideal.  We eventually returned to the anchorage opposite the Smyrna Yacht Club and anchored at 29°00.88N 080°54.73W in 4 metres depth.  It was a little crowded and I was worried about boats being on moorings causing us problems when the tide turned, but everything was okay. 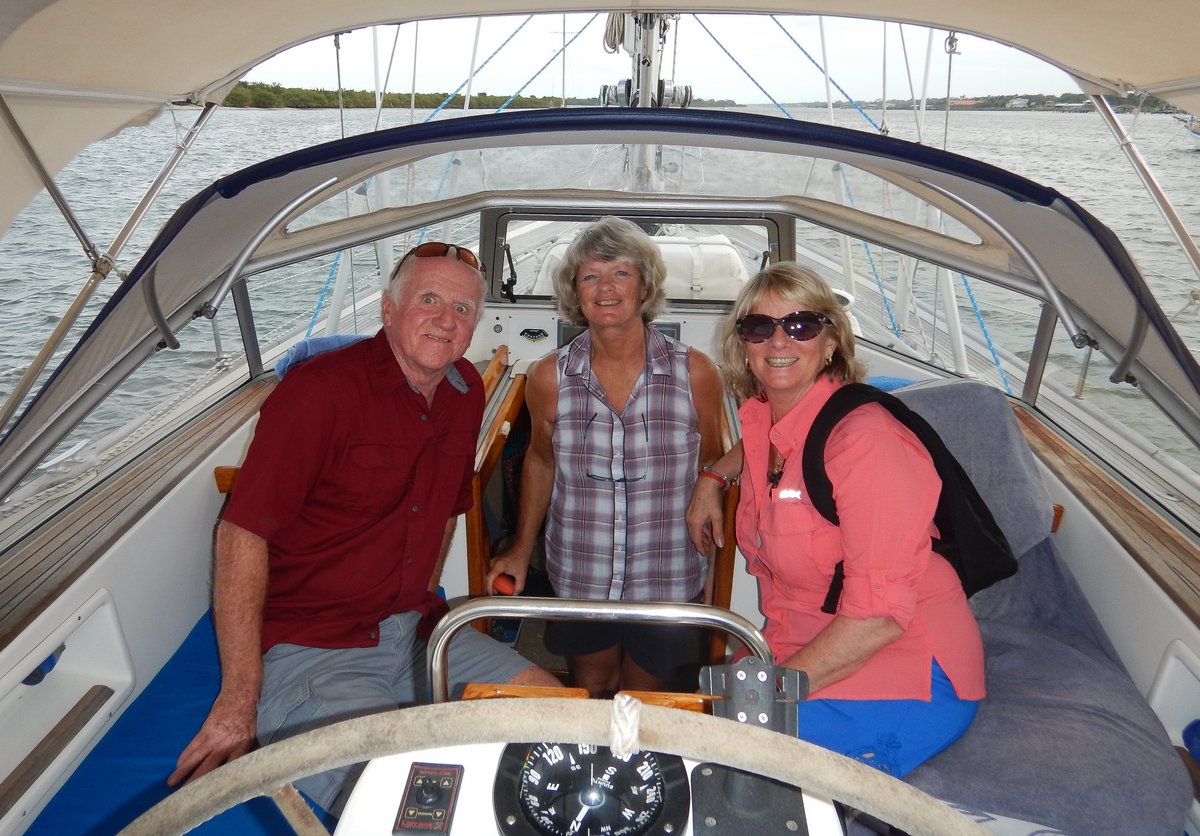 I went ashore to the Yacht Club and talked to Dave the Dockmaster, who said it was okay for us to leave our dinghy in their marina.  He was very friendly and said it was free.  Tony and Mary came out to see Alba and we had a good chat catching up on the last 30 years.  Tony has recently given up skydiving after nearly 50 years in the sport and is very interested in sailing now.  He’s looking to buy a boat, but isn’t interested in Alba because he wants a catamaran.

In the evening, Tony took us out for a meal in a posh restaurant, where we met two of their friends, Howie and Caroline, who are also skydivers and sailors.  A huge thunderstorm came through just as we were leaving the restaurant, so rather than getting soaked going back to the boat, we went to Tony’s house for a cuppa tea.  Thankfully, Alba was still there went we finally got back.

We’ve been living on Alba for exactly eight years today, so I worked out a few statistics.  In the past 12 months, we’ve sailed 3,033 nautical miles bringing our total to 44,204 miles since we moved aboard.  In the last year, we’ve run the engine for 233 hours, which at 5 knots equates to 1,165 miles and means that we’ve spent 38% of our time motoring.

9 April 2019   New Smyrna, Florida
The weather forecast for today was for thunderstorms in the afternoon, so we decided to stay put.  Tony came and picked us up in his car and took us for a quick tour of the area.  We drove along the hard-packed beach and had a stare at the Ponce de Lyon Inlet, which in the light winds and high tide looked very benign.  Tony then took us to a supermarket where we bought a few more provisions to take advantage of the car.

After lunch, the skies cleared and we had fluffy white clouds against an azure sky.  However, by 15:00, the clouds had built up and by 16:00, the wind had picked up to 20 knots from the south with dark clouds approaching from the south-west.  Thirty minutes later, there were a few bright flashes of forked lightning, so we disconnected our laptop and put our phone and tablet into the oven.

We could see the torrential rain racing across the water towards us and the wind followed soon after, pushing us over to 30 degrees as it slammed into us.  The visibility dropped to 20 metres and the wind howled – the highest gust was 58 knots.  Fortunately, it’s good holding here and nobody around us dragged.   Ten minutes after it started, the skies brightened and we were left with no wind at all.  It’s serious weather here.

The ICW has been very easy to navigate so far with very dependable charts and a well-dredged channel.  Further north, it’s not so good, so I spent a few hours doing some research and found that the US Army Corps of Engineers (USACE) carry out regular and continuous surveys of the ICW, and publish charts showing their actual depth readings.  For $40US, I bought an Android app called Aqua Map, which acts as a chart plotter on our tablet and overlays the USACE data over the normal marine charts.

10 April 2019   New Smyrna to St Augustine , Florida
The alarm was set for 06:45, but at 06:30, I heard the sound of a boat pulling up an anchor, so I went on deck to have a look.  It was pre-dawn twilight, but I could see enough to move the boat, so I dragged Glenys out of bed and we rushed to catch the 07:00 opening of the Bascule Bridge, which is north of New Smyrna.  With 60 miles to go, it was good to get an early start.

The first section was through low lying marsh land, which was lovely in the early morning light.  We passed through Daytona Beach, which is lined with apartment buildings and has five bridges, but fortunately only one of them was a lifting bridge.  After Daytona, the landscape became more rural with the occasional run of waterside houses.

The Aqua Map app was worth every cent.  It worked impeccably as a chart plotter and the overlay of the USACE charts was indispensible.  There was a very tricky area near Matanzas Inlet, where the inflowing water has deposited sand on a bend.  The USACE charts showed us exactly where to go and we saw nothing less than 3 metres depth.

We arrived in St Augustine at about 17:30 and went straight onto the fuel dock at the Municipal Marina to top up our diesel tanks, which cost $260 –it’s expensive doing all this motoring.  While we were there we filled up our water tanks as well – we’ve not been able to run our water-maker since we entered the ICW because the water has too much sediment.

We were able to get off the dock just in time to make the 18:00 opening of the Bridge of Lions and picked up a mooring on the north side of the bridge.  It was a long 60 mile, 11 hour day – motoring on the ICW is much harder that sailing along the coast because you have to concentrate on navigating the boat all the time.

11 April 2019   St Augustine, Florida
We just managed to drag ourselves out of bed before 08:30.  We were planning on having a leisurely tourist day, but I decided that I ought to do a couple of jobs on the engine. The sea water pump has started to leak again, even though I replaced the seal and a bearing in January, so I tackled that first.

I’ve done this job too many times in the past 18 months, so it only took me 30 minutes to remove and strip down the pump.  The spring inside the lip seal was badly rusted, so it must have been a normal steel spring instead of a stainless steel – I bought it in South Africa.  I replaced the seal with a new stainless steel lip seal (which I’d bought in the UK) and rebuilt the pump.

With the pump installed on the engine, I changed the engine oil and filter.  I was hoping to wait until we get to Annapolis, but we’ve done so much motoring since we left the Bahamas, that we’ve just passed the 200 hour limit between oil changes.  It was a fairly painless job, so I’d finished my maintenance chores just before lunch. 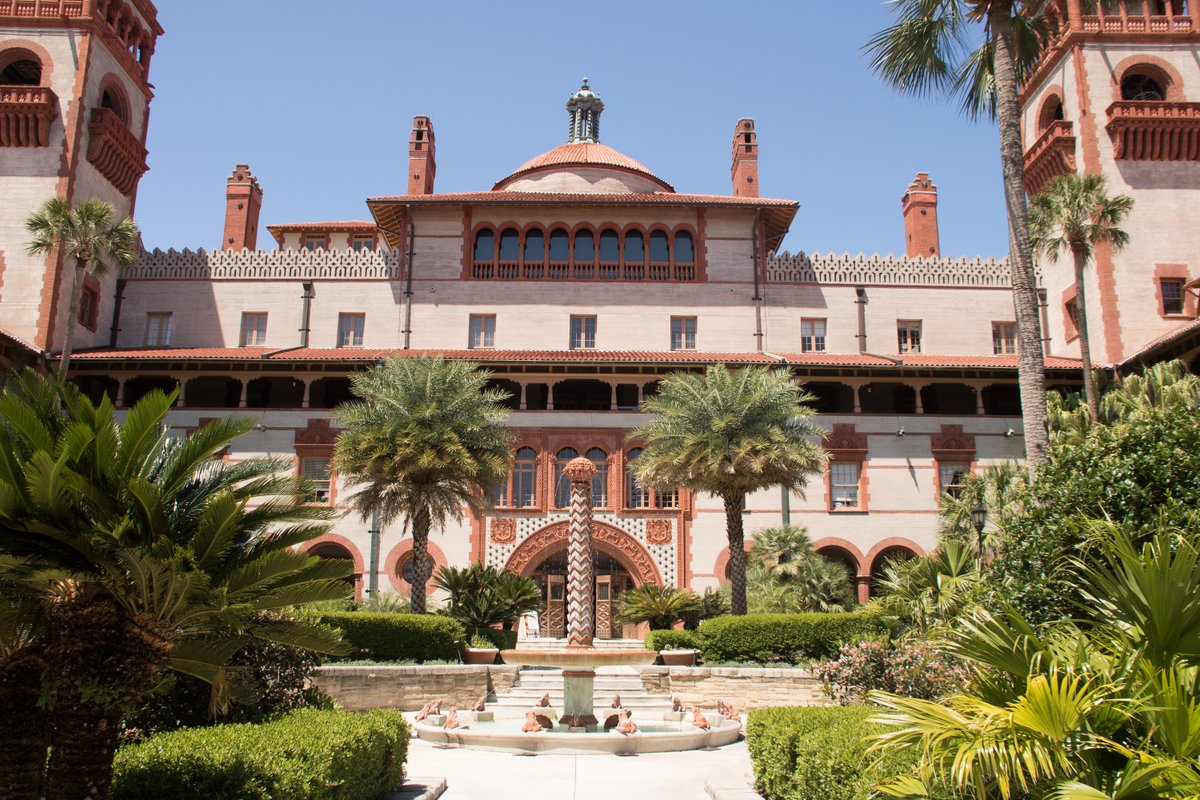 In the afternoon, we went for a stroll around St Augustine, which is a very touristy town.  It’s the oldest European-established settlement within the United States.  The Spanish arrived in 1565 and built a fort which helped them in various battles with the English and pirates for the next 300 years, before the town was handed to the USA in 1820 in the Adams–Onís Treaty.

In the 1880s, Henry Flagler, an oil tycoon, built two very grand hotels and transformed the quaint town into the winter resort of American high society.  The architecture of the large hotels and other buildings is impressive and the narrow streets of the old town are quaint, now turned into a plethora of bars, restaurants and souvenir shops.

After a couple of hours wandering, we’d just decided to go back to the boat, when Tony rang us and said he was in St Augustine having just looked at a few Catamarans.  We met up and had a nice afternoon with him & Mary and then went out for an interesting evening meal at The Floridian restaurant.